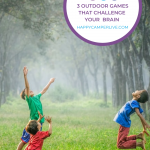 Now that your kids are back in school and learning again, it’s easy to let them watch TV, play video games, or do some other mindless activity in their free time. After all, at least they’re using their brain for part of the day. However, why not have them play games that are fun, exciting and still challenging to their cognitive abilities?

Take outdoor activities, for example. You could easily let your kids play tag in the driveway or give them a soccer ball to kick around while they’re bored. These are perfectly good options when you want them to get some basic exercise, but why not make these games more engaging and mentally stimulating? Here are 3 outdoor games that will both challenge your kids’ brains and keep them up and active!

Goal: Repeat the actions of Simon but only when preceded by the phrase “Simon Says”! 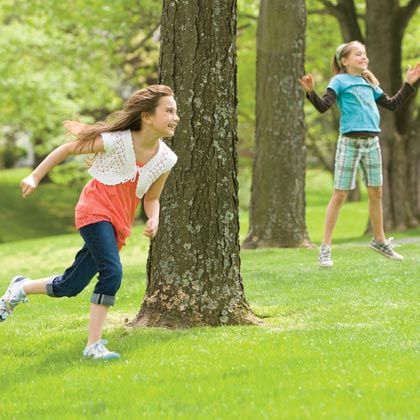 This game is a fun take on the basic premise of “Simon Says” with a more active gameplay. Select one person to play the role of Simon. They’ll act as the leader while the rest of the players act as followers. Simon then begins doing a sequence of actions while the other players repeat the actions as quickly as possible. However, if Simon doesn’t say “Simon Says” before doing one of the actions, and another player does it anyway, they’re out. If a player lags too far behind or skips an action, they are out as well. Repeat until only one player is still following the leader, and then choose another Simon for the next round.

The aspect that makes this version of Simon Says “advanced” is the type of actions that Simon does. They should be difficult enough that the followers have to pay close attention but easy enough that it’s possible to follow with enough concentration.

Sample Gameplay: Simon begins by doing five jumping jacks, three somersaults, and running around the playing field, all while announcing each action with “Simon Says” beforehand. The other players repeat Simon’s actions. Then Simon could proceed by doing a cartwheel without announcing “Simon Says.” If players do the cartwheel, they’re out. It’s likely that actions like these will be highly challenging to players’ minds and bodies!

Goal: Discover the location of the objects in as few turns as possible!

This game takes card matching games to a whole new level! A parent or supervisor lines up all of the buckets in a row or pattern on one side of the playing field and hides the two objects under two different buckets. Then they turn each bucket over so that the objects are hidden and each bucket looks the same. The two players start all the way on the other side of the playing field and take turns running to the buckets and lifting up one. If they find an object, they get a point, but if they don’t, they have to turn the bucket over and run back to the other side. The point is for players to try and remember which buckets were empty and which had objects in it. Once all the objects have been found, parents should hide them again under different buckets.

To make the game more challenging, you can hide pairs of objects under the buckets, so that players can uncover two buckets at a time but have to find both objects in a pair to get the point. Either way, this game forces kids to use their brains to remember which buckets were empty, and the added aspect of running back and forth gives kids much needed exercise. Have fun with this game that’s great for physical and mental fitness!

Goal: Catch the ball that’s thrown at you and do the associated activity without making a mistake!

All-Sports Toss is incredibly simple to set up but deceivingly difficult for those playing. One person is the thrower and the others are catchers. Simple enough, right? However, the thrower can toss whichever ball he likes at each catcher, and the catcher has to do a different action for whichever ball is thrown at them. If they do the action, they get a point and the game continues. If the catcher drops a ball or fails to do the correct action, they’re out. Keep track of how many points in a row you get. If you’re still confused, here’s a way this game could play out.

If these games give your brain a workout, let us know! Take a video of your favorite brain bursting game, and upload it to the Campfire on the Happy Camper Live website. Time to put our thinking caps on!

Camp is Alive with the Sound of Music

Music Camps for Kids at Happy Camper Live Kids really benefit from learning music From the time you were very little, music likely played a big role in your life. It’s probably been awhile, but I bet you can recite every lyric of the Itsy Bitsy Spider. And don’t forget all those lullabies that were […]

GET READY TO SHOW OFF YOUR TALENTS AT THE HAPPY CAMPER LIVE CAMPFIRE! THE WORLD’S LARGEST CAMPFIRE IS WAITING FOR YOU! Here are five top tips for preparing your performance! Choose your skill or talent! Whether you can play Mozart on the piano, dribble a soccer ball or whistle, there is something that you can […]