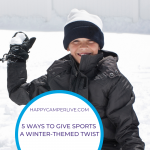 It’s December and the first official day of winter is right around the corner. Some of you have snow in your backyard already, and some of you will soon. It’d be easy to stay indoors when the snow gets here, but there are so many health benefits to staying active and spending time outside on a sunny day. Don’t let the winter keep you indoors. Bundle up so you’re safe from frostbite and the elements, and enjoy some of your favorite sports with a winter-themed twist. Reward yourself with a cup of hot cocoa when you come inside!

Here are five sports you and your kids can play in your backyard or at the playground, each with a winter-themed twist! 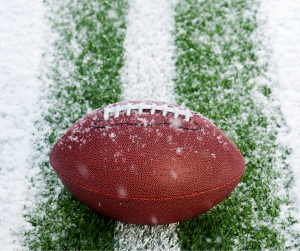 The twist: Use snow piles for the end zones.

Football is something that can be done in all seasons, except this time of year you’ll have more padding on the tackles. Shovel soft snow into large piles at both ends of the field, and use those as the end zones. Players can score, by running and jumping into the pile of soft snow.

It’s key when doing this that you make sure the snow is fresh and soft. Do not do this if it’s hard snow or ice because that is a safety concern. Dress warmly for outdoor weather, and have fun!

The twist: Throw snowballs instead of baseballs.

Playing baseball or softball in the winter isn’t ideal. It can be done, however, running from base to base would turn into trudging as you try to combat the snow. You don’t have to stop practicing though! If you love baseball, set up some targets at various distances in your backyard and work on your throwing and aim with snowballs! You’ll need to wear gloves so your hands don’t freeze. Pack the snowballs tightly before throwing. To make it easier on yourself, pack a bunch of snowballs first so you can keep throwing without having to stop and make more snowballs after each throw. 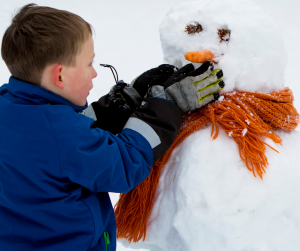 The twist: Make snowmen and  use them as the goal posts.

This one combines creativity, soccer and snow. The first real snow day of the year we all rush outside and build snowmen. They hang around our yard bringing cheer to those who pass by, but now we have another use for them — soccer goal posts!

Create the goal posts by building two snowmen about five feet apart on each side of your playfield or backyard. Decorating your snowmen will allow them to be more visible from a distance. Use some leaves or rocks for the buttons, and a carrot for its nose. Then, get to shooting goals! If you’ve got a smaller yard, you can just create one set of goal posts and use it to practice your kicking and aim.

The twist: Complete a snowsuit relay.

For this game you’ll need two pairs of snow pants, two hats, two jackets, two pairs of mittens, two scarves, and two pairs of snow boots. It’s best to go larger on size so everyone can participate, plus it makes it sillier. Divide into two even teams. Set up a start line, and at the other end of your yard set out all of the snow gear. On the whistle the first person will run to the other end of the yard, put on all the snow gear and run back. Then they have to take all the gear off, and give it to the next runner who will put it all on, run down and back, and repeat until the last person completes it. It’s harder to run in all that gear than you think, but at least you’ll be warm!

Use brightly colored cones, hula hoops, and pool noodles to create tunnels for kids to crawl through, jump over and weave through. Another part of the course could be to use a shovel and carry a shovel full of snow to another destination. Then return the shovel to its starting point, and run back.

To make it competitive, time everyone each time they go through. Try to get faster each time through. Switch up the route after a couple of times, to keep it interesting.

For Max Learning and Development, Give Kids a Variety of Activities and Challenges

by Your Friends at School Zone & Anywhere Teacher Kids need physical activity along with periods of focused, in-seat learning. They need digital skills but also still need pencil-and-paper know-how. And no two kids are the same or learn at the same pace, so  they need opportunities to explore at their own pace and discover […]

With the current state of global health and the associated safety restrictions, it’s become more difficult to organize games for kids to play. There’s limited access to equipment, playing space, and social interaction, making many traditional backyard games difficult or even impossible. Not to fear! There are still some great alternatives that are safe and […]

8 tips for creating a summer camp feeling at home!

Here are some great ways to fill your home with the feeling of summer camp any time of the year! When we send our kids off to summer camp, something magical happens. They enter a bubble where they feel safe, inspired and part of a warm loving community.   The beauty of this intentional isolation […]

5 Ways To Be Healthy In Winter