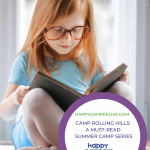 A Summer Camp Book Series: Friendships, Firsts, and Being True to Who You Are

Kids can fall into the magic of summer camp in the middle-grade Camp Rolling Hills book series by Stacy Davidowitz. Experience the adventures of sleepaway camp—raid wars, a dollop of romance, and lots of s’mores!

Friendships are the glue of Camp Rolling Hills. You’ve got forever friends like Slimey and Melman, new friends like Bobby and his cabinmates, and friendships with a dollop of crush like Slimey and Bobby. The friendships form, morph, stretch thin, and snap back even stronger. Do you have a best friend? How has your friendship evolved? What is your first memory with that friend? Your favorite memory with that friend? Have there been any instances that have brought you closer?

At Camp Rolling Hills, the characters experience so many firsts: first best friends, first kisses, first raids, first robot explosions, first s’mores, and more! Do you remember the first time you experienced something special? What was that like? Did it change you in any way? Inspire you?

BEING TRUE TO WHO YOU ARE

Slimey, Bobby, Melman, and Steinberg learn to be true to who they are, because at camp, when you embrace your inner weirdness, everyone around you embraces it, too. How would you describe yourself? Is there anything about you that you’ve tried to hide or change? How did that feel? Is there anyone in your life that you feel you can be 100 percent yourself with? What is that like, being totally true to who you are? 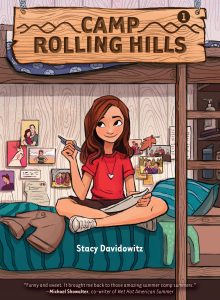 Finally, it’s summer! Stephanie—aka Slimey—has been counting the days until she can return to her favorite place in the entire world, Camp Rolling Hills. And this year she’s especially happy to be back—she’ll have eight blissful weeks away from home, where life has been decidedly rocky. New kid Bobby, on the other hand, is pretty sure he’s in for the worst summer of his life. He does not understand his weirdo cabinmates, the group singing, and the unfortunate nicknames (including his: Smelly). But he does understand Slimey, and the two soon fall in crush. This summer might not be so bad after all! But then a fight sets off an epic, campwide, girls-versus-boys prank war. Bunks are raided! Boxer shorts are stolen! And it’s up to Slimey and Smelly to keep the peace. 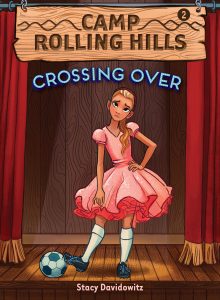 There’s only one thing Melman loves more than soccer: her summers at Camp Rolling Hills. So she’s pumped to be back—until she realizes her bunkmates have gone totally boy-crazy over the school year and plastered their cabin in pink. Pink posters, pink t-shirts…it seems that the only not-pink thing in the cabin is Melman herself. That is, until she’s given a dare in front of the entire camp: wear a pink princess dress. For Three. Whole. Days.

Steinberg’s summer gets off to a rough start, too, when his robot (usually his area of expertise) blows up during a camp-wide robotics contest. Steinberg might feel like a loser at home, but camp’s supposed to be his place to shine.

Steinberg without robots? Melman in pink? This whole summer feels turned upside down! To set things right, Steinberg and Melman team up and hatch a plan that involves hamburgers, bar mitzvahs, and drag. 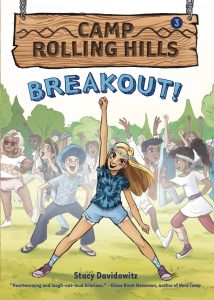 Summer’s almost over, which means one thing and one thing only: It’s Color War time! Color War is the event of the summer, a massive camp-wide competition that divides the campers into two teams: blue and white. All of the upper campers are hoping they’ll be selected as Lieutenant, a team leader position and a huge honor. Jenny’s convinced she’s got Lieutenant in the bag, being a “popular girl” and all. And Play Dough sure hopes he does, too—members of his family have been White team Lieutenants for generations, and he doesn’t want to disappoint them. But when assignments are announced, both Jenny and Play Dough are in for a big surprise.

With the entire camp now amping up for an all-out war, can they overcome crushing expectations and lead their team . . . to victory? 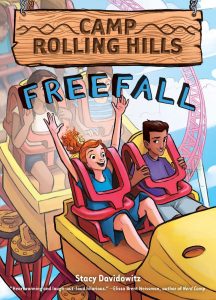 The gang’s back for a very special summer at the Hills—the camp’s 50th anniversary! Wiener is especially excited to be back, because his little brother Max is finally coming to camp. Wiener can’t wait to show Max the ropes (and show Max what a cool big brother he is), but there’s a snag: As the smallest and youngest in his cabin, Wiener gets teased a lot, and it doesn’t take Max long to realize Wiener might not be the Camp Legend he made himself out to be.

Meanwhile, inspired by a big change at home, Missi is determined this summer to be 100 percent true to herself—no more pretending to like celebrity teens just to fit in! But when she catches the eye of a suave exchange student, she starts to wonder whether she was better off playing it cool.

Stacy Davidowitz runs camps, works in the theater, and teaches creative writing and drama in NYC five days a week, students from pre-K to college! She is also a playwright and screenwriter, as well as the author of the three-book Hanazuki series (Hasbro/ABRAMS) and the upcoming book/film The Chance to Fly with Ali Stroker.

5 Benefits of Learning to Play Soccer

The Value of Soccer for Kids What your kids gain from playing soccer   Soccer is the most popular sport in the world. It is also one of the most well-liked youth recreation activities in the world. You may know that soccer is good for your physical health, but are you aware of all its […]

Fall is a great time to get outside and enjoy nature! Take advantage of the cool weather, the changing of the leaves and the fun fall opportunities before it gets too cold. Take a walk and explore your neighborhood, collect leaves, and get in the fall spirit. Here are 3 fun fall activities you can […]